Vic looks in disbelief as Christmasland goes up in flames. Wayne points out that she’s bleeding, and Vic introduces a new game called "Find the Triumph." She tells Wayne that if they find it before anyone else, they can go for a fast ride.

Vic finds Maggie searching for her Tiles. The Triumph is too small to fit all three of them, so Vic intends to take Wayne back to the Real World and return for Maggie afterward.

Wayne spots the Triumph. Vic sits him in front of her and starts the bike. She rides onto the Shorter Way. Wayne makes mention of the bats inside her Bridge. Vic tells him that all the bats are his friends. Vic arrives at Sleigh House and drops Wayne off with Lou. Tabitha inquires about Maggie, who Vic informs is still in Christmasland. Despite being brought back home, Wayne is still very much a monster, lunging at Tabitha.

Manx drives the Wraith to the front gate of Christmasland. In his weakened state, he is barely able to pry the doors open, but he manages to do so. However, as he’s about to leave, the Christmas carols on his radio stop playing, which could only mean that Vic has returned. So he turns back around to face her.

Maggie's injury from her previous encounter with Manx has left her hurt and tired. She rests on a large stone and find herself surrounded by the Christmasland kids. They call over a doctor, who replies that they’ll have to amputate. As the children approach, Vic returns on her bike and scares them away. Maggie wants to stay and look for her Tiles, but she is forced to flee on the back of the Triumph with Vic as Manx chases them down in the Wraith.

Lou restrains Wayne. Tabitha then starts to hear children screaming. Wayne says that it’s Christmasland and runs off. They find him humming Christmas carols and staring at his ornament. Tabitha informs Lou that some people believe that souls can get trapped inside an object. Lou recalls Maggie’s Tiles saying "WHEN SOULS FALL." It must’ve been referring to the ornaments. Lou grabs Wayne while Tabitha smashes his ornament, which appears to cause him pain initially.

Vic and Maggie ride over the Shorter Way with Manx following closely behind. Vic comes to a stop as she refuses to lead him to her family. With Manx trapped on her Inscape, Vic grabs Maggie’s hand and takes control. She manipulates the bats in her bridge to attack the Wraith, shattering its windshield.

Lou comforts Wayne as he pukes uncontrollably whilst Tabitha breaks the remaining ornaments. Lou tells her to stop as he fears that she’s hurting Wayne, but Tabitha believes this to be the only way to save him.

Manx drives towards Vic and Maggie. However, Vic wills the floorboards beneath the Wraith to crack. In doing this, she brings herself great pain, specifically her eye, but she continues until the Wraith falls off the bridge and disappears into the white static beneath. Defeating Manx seemed to come at a great cost as the Shorter Way began to collapse with Vic and Maggie just barely escaping. They return to Sleigh House, where Vic is greeted by Lou and Wayne, and Maggie by Tabitha, who calls in an ambulance. Just as Vic reveals that Manx is finally dead, the Christmasland children appear from within the trees, human once more. Among them is Mike Demeter, who calls out for his dad. Tabitha then calls in Social Service in addition to the ambulance. Hidden on the hill above, Millie watches angrily after discovering that her father was dead.

One month later, Vic, Lou, and Wayne have moved back into their home in Colorado. Vic catches Wayne trying to hide his food in his sleeve and says to him that he needs to eat. He tells her to let him go while holding a fork in his hand threateningly. Lou says that it’s alright and tells Wayne to clear his plate. Vic remarks that Wayne hasn’t eaten a normal meal in weeks. Lou asks how long it took for her to get over Manx. He reminds Vic that they’re all safe now.

At the Haverhill Public Library, Maggie has been searching for weird and unexplainable phenomenon, such as Big Foot and haunted psychiatric prisons. Tabitha arrives with Maggie’s Tiles. She reveals that one of the kids had it at processing. Tabitha has made progress with the kids. Some still have families while the other will be put into foster homes. Some parents bring them back though, because they’re dangerous. Before Tabitha leaves, Maggie tells her that if she ever has a question, she’ll be willing to ask her Tiles. Tabitha simply replies by telling Maggie to take care of herself.

Vic is having trouble sleeping, so she turns to her sketchpad. She draws a hero robot to protect Wayne and help find him when he’s lost. Lou reminds Vic that she found Wayne and tells her not to stay up too late.

While drawing, Vic overhears a noise coming from outside her room. She finds Wayne standing on the kitchen counter eating sugar. He says: "Sugar for dinner is fun." Vic tells him to put the sugar down and come to bed. He apologizes and jumps into her arms. Before sending him off to bed, Vic and Wayne brush their teeth. Lou finds them in the bathroom and tells Vic to come to bed when she’s done. Wayne spits out a mouthful of blood in the sink. As Vic tucks him into bed, he asks if he’s going to be okay. She assures him that he will be. Wayne asks if she ever got better after Manx hurt her. She promises that she did and that he will as well.

Wayne goes to sleep and has a nightmare of mutilated animals, his father dead on the kitchen floor, and his mother’s head hanging on Charlie Manx’s tree. Wayne gets dressed and sneaks out the house while they sleep.

Wayne rides his bike to Sleigh House, where he finds Millie feeding on deer. He tells Millie that he wants to go back to Christmasland, but she hasn’t found a way to return and has been forced to live in the woods. He asks Millie what was it like to live in Christmasland. It was wonderful by her account. She was the boss of the kids, she had all the candy she could eat, and she had anything she ever wanted. But now, she has to live outside and hunt for food. Not to mention that Vic killed her father. The Real World is lonesome. Wayne advises her to break her ornament in order to turn back into a regular kid so that maybe she can be adopted. However, Millie doesn’t want to be weak and ordinary. She asks if Wayne wants to grow up, which he doesn’t. Most of the adults he knows are miserable and tired. Millie intends to keep her ornament and rebuild Christmasland. She’s going to bring back all the kids one-by-one and asks for Wayne’s help. Vic arrives in search of Wayne. Millie fears that Vic will try to kill her or break her ornament, so she runs off, but not before telling Wayne to remember her. Vic calls out to Wayne and he comes out from behind the wall of bricks. He asks how she knew he would be there. Vic doesn’t know. She simply had a feeling.

Three kids discover Manx’s body and the Wraith floating in a lake in Haverhill.

Vic and Linda have packed Chris’ belongings and brought them back to her house in Haverhill. She informs Vic that she met him when she was just 12 years old. Admittedly, Linda misses him. Vic recalls her father telling her to forgive herself. Linda remarks that Chris was always good at giving advice he couldn’t take, and forgiving one's self is hard advice for a mother to follow. Vic wonders if Linda ever forgave herself — for the struggles she had along the way whilst raising Vic. Linda likes to think she has. Vic used to resent how tightly Linda used to hold onto them, but she understands it now. Linda asks about Wayne, who Vic says is different, and she doesn’t know how to help him. Linda’s biggest regret with Vic is covering for Chris. Perhaps if they talked about what was going on rather than hiding it, Vic’s life might’ve been easier. Vic tells her mother that she loves her, and Linda invites Vic to move in.

After discovering that Manx’s body turned up in the lake along with the Wraith, Vic, Maggie, Lou, Wayne, Tabitha, and Linda, gathered at the scrapyard to watch the Wraith get compacted after Manx was cremated. Vic surmised that Manx and the Wraith were dumped in Haverhill because it’s where the Shorter Way originated, before her father helped destroy it when she was a kid.

Vic and Maggie celebrate their victory over Manx at a cafe. Vic reveals that Lou is officially adopting Wayne and that they’re going to stay in Haverhill for a while. Being in Gunbarrel was bad for both Wayne and Vic. Maggie wonders how many other Inscapes there are in the World of Thought. She wants to take Vic’s Triumph out of storage to explore, but Vic wants to stay in the Real World. Maggie reminds Vic that she’s a Strong Creative, but Vic doesn’t want to put her family in more danger. Maggie replies that not every Inscape is Christmasland, reminding Vic of Jolene and her Tunnels. They’re so much left unexplored, such as "The Crooked Alley" and "The Empty Forest." Maggie’s Tiles have told her about all kinds of places. However, Vic isn’t interested.

Wayne draws a picture of himself and Millie at Christmasland. Vic and Lou enter his room, and he hides the picture under his pillow. Wayne asks when they are going home. Lou informs him that they’ll be in Haverhill for a while. Wayne claims to miss his friends, but Vic knows that he misses Christmasland. Admittedly, she used to miss Charlie Manx. She thought that chasing him was fun. She then notices the picture under the pillow. He reluctantly agrees to allow her to see the picture of him and Millie. Wayne believes that there’s something wrong with him. Vic tells him that it’s okay to feel that way. She knows the feeling. It’s why she chased after Manx, drank too much, and why she ran away from them. Vic makes a promise that they won’t run away anymore and that they won’t pretend to feel okay when they don't.

Maggie burns her arm with a cigarette and asks her Tiles how to find the World of Thought. The Tiles spell out "HOTEL." So she returns to the Providence Hotel, where she killed the Hourglass Man. She follows the flickering lights to an out of order elevator. It opens upon her arrival, and she takes the elevator down.

Vic sits at the kitchen table with Wayne’s drawing of Millie at Christmasland. She opens the cabinet. Rather than grabbing the liquor, she grabs her sketch pencils and begins drawing.

Two teens drive out to the Sleigh House, where rumor has it that the land is haunted. They are startled by the sound of a thud on the roof. It’s Millie. She punches through the front windshield and attacks. 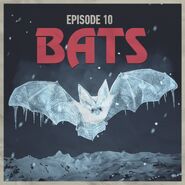