Dropped off of the Shorter Way (by Vic McQueen); body cremated and the Wraith crushed

Charles "Charlie" Talent Manx is a main character on AMC's NOS4A2. He is portrayed by Zachary Quinto.[1]

Manx is a powerful creative who feeds off children's souls, and then deposits what remains of them into Christmasland – a twisted Christmas Village of Manx's imagination where everyday is Christmas and unhappiness is against the law.[1]

The Manx family lived in a mining town with very few children, and the children there thought the town was haunted and that Manx was odd. From sunrise to sunset, the young Charlie Manx played alone, sledding in his Phantom, building snowmen. His mother, Fanny Manx, used to banished him outside to play so she could stay in to indulge in her "selfish pleasures".

As Manx came into adulthood, he got a job as a chauffeur for Horace Haber. Shortly after, Manx began dating Horace's daughter, Cassie, whom he later eloped with and had a child, Millie, named after Cassie's mother. After Horace died, Manx and Cassie were forced to live on their own. It was a difficult time for the Manx household, which put a strain on their relationship. The last straw came when Manx purchased his classic 1938 Rolls-Royce Wraith for $3,000 with Cassie's mother's rings. With that, Cassie planned to take Millie and leave. However, Manx wouldn't allow it. So, he tricked her into getting into the Wraith. As he drove, Manx's eyes filled with white static, an empowering discovery of his nature as a Strong Creative. In the back seat with Cassie, Millie gradually transformed into a demon and ripped the flesh from her mother's face. Manx would then awaken in Christmasland for the very first time, realizing then and there his true potential.

In the 1950s, he had a relationship with Jolene July, who was a fellow strong creative. One day at her job as a carhop, Charlie came to her and asked her to marry him and become "mother" to all the little boys and girls in Christmasland but she refused as she was afraid of what he was doing to the children he was "rescuing". This led to a fallout, as that same night when Jolene was leaving work, Charlie tried to run her over with his Wraith. However, she used her skates to escape into her inscape. At some point after this, Charlie was able to find Jolene and cripple her, and she has been in a psych ward ever since.

Since realizing his potential as a Strong Creative, Manx has displayed various unique abilities, starting with the physical and mental connection he shares with his 1938 Rolls-Royce Wraith. In his first encounter with Maggie, he was alerted by the Wraith of her arrival, which resulted in Maggie being ran over by a driver-less vehicle. This connection also allows him to capture children's souls via the car and transform them into cannibal demon versions of themselves, as well as keep the doors shut to physically capture those inside. Damage to the car is the only kind of physical damage he can suffer, especially to the engine; Jolene July damages it with the help of Vic McQueen, who later set the Wraith on fire. As the Wraith went up in flames, so did Manx, causing him to shrivel up and burn. Removing the engine can weaken and age him; returning it to its place under the hood brought him back after his body had died from the injuries sustained in the fire.

Beyond his connection to the Wraith, Manx is also immortal and young, so long as he replenishes his strength by abducting kids and taking them to Christmasland. More over, he has also displayed superhuman strength, the ability to identify children with troubled lives--as manifested in what he calls the Graveyard of What Might Be--and an ability to locate children in their dreams. He did this in the case of Wayne McQueen, who established a connection with Manx via a candy cane.

Charlie's appearance changes throughout the show. He sometimes appears very old and frail to the point where he can barely walk, is blind in one eye, and almost completely bald. However, this only occurs when the Wraith needs attending or he is without a child for long duration. When fully fed with the Wraith undamaged, he appears as the age of the actor, in his forties.

Manx is extremely manipulative, often using candy, toys and promises of never-ending happiness to kidnap his victims. For instance, Daniel Moore, after going outside to find a candy cane on his front doorstep, found himself overly enticed at the sight of the Wraith doors opening to reveal Christmas presents of multiple shapes and colors. Even after kidnapping the children, Manx continued his manipulative ways, often lying to the children about how they were mistreated by their undeserving parents, using this loneliness and feeling of not being wanted to gain the children's trust.

Manx has a deep seated hatred for women, blaming them for why his life was so cruel - this hatred stems from his own mother, who neglected to help him as a young child when he was sexually abused, and whom he killed. Oftentimes, Manx idolizes women he sees as "pure," wishing for them to become mother to his many kidnapped children and live forever in Christmasland, quickly changing his tone when he finds out they are not perfect in his eyes, such was the case with both Jolene and Vic. This leads to him referring to almost all the women he encounters with derogatory terms. Manx is quick to kill the women he once held in high esteem as soon as they disappoint him and is known to hold a grudge.

This misogyny is further seen when he tries to manipulate Lou into not helping Vic, telling him that "taking orders from a woman is not a good habit," and that "helping Vic is pointless because when it comes to woman, nice guys finish last." [2]

A man who saw himself as having been afraid to take charge of his life, who feels a need to live up to the idea of being a masculine provider, who as part of that keeps his childhood traumas silent and when human coped with them through drinking, he accused his wife, Cassie Manx of wanting to prostitute herself and their daughter Millie Manx when she wants to work to support their family, and saw his giving up on his life and the world with his drunken murder/suicide attempt as a way to keep control of his family instead of losing it to Cassie. The final version of his inscape, Christmasland, is built upon this; he feels bound to sustain his existence and his idea of himself as the perfect father by treating this place maintained by death as an escape from the world which he did not feel he could live in, going from trying to make Millie feel as if it was them against Cassie and the world to abducting children he could change in the same way, playing house with the children he preyed on in a different but parallel way to how his rapist groomed him, using them to keep his youth. He refuses to see how he has fallen into the same life patterns he once sought to escape, retreating so deep into his fantasies and his need for control that his life spirals away from him anyway: first when he fails to contain the threat he's made of Vic with either marriage or death, and again when he dwells on the desire to punish Vic in taking her child to the extent of not being present with, and alienating, Millie. 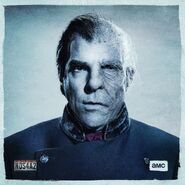